Lockdown on the Pit Top

Well it's all gone a bit post-apocalyptic hasn't it. In a year where I'd had a vague idea of a county year list for the first time in a decade and had made a half-decent start and then... confined to the garden and walking distance.
Time to make the best of a bad situation and see what's possible at a micro-level locally. Mike Carr made a comment about the potential of the reclaimed pit top here at Pegswood after I posted some sightings from the end of the garden a few days ago. It's not somewhere I'm unaware of and I have put in the occasional half hour from there when I haven't fancied anything further afield. Has to be said I've never really had too much, calling Green Woodpecker nearly two decades ago and never since, a few Common Buzzards and Sparrowhawk but no real passage of note. However it has decent vistas east and west, a view of one corner of Bothal Pond and a couple of seasonal flashes to the East (and realistically unless I put the bike back on the road to do Newbiggin it's about as good as I'm going to get 10 minutes from the door on foot).

So after a quiet start yesterday afternoon for an hour I headed up there this morning for an 07:00-08:00 vigil without any huge expectations. A single Greylag Goose flew over noisily as I reached the top of the short incline and then two Mistle Thrushes lifted from the wood on the north side. Looking east three Mute Swans swept past on the south side heading west, they were followed at intervals by a further seven (3 and 4) moving North over Ashington. Having seen the Scaup at Bothal Pond fairly frequently I knew where it likes to haul out, the short spit on the east side, and this luckily is visible from the pit top, as was the preening Scaup this morning alongside two Tufted Ducks for size comparison.
Things got a bit mad after that, scoping the edges of the seasonal flashes hoping for the Longhirst Green Sandpiper and two Avocets suddenly appear from behind a hedge obscuring part of the flash. I've had them nearby on other flashes previously as they move through to breeding locations but I was well chuffed to see them on my first big lockdown watch! 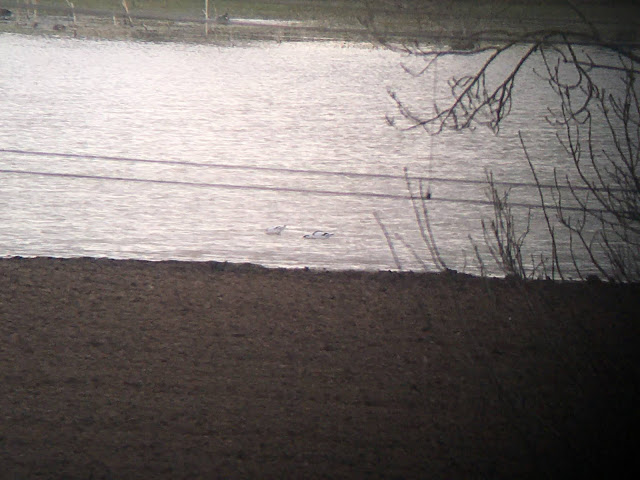 Avocets at the edge!

Further along the same field a couple of courting Stock Doves were another new addition. In terms of moving birds, a couple of the Common Buzzards this morning were actively moving north and a pair of Grey Wagtails wanged through on the east side as well. All in all with 25 species recorded a satisfying hour and enough to show potential, with decent views over some of the River Wansbeck Osprey shouldn't be out the question or possibly Little Egret. I'm actually looking forward to seeing what I can pull out the bag here over the next couple of weeks.