It's been three and a half years since my last blog post, I can hear Sinead O Connor in my head when I read that back. Much has changed for me in that time but I long ago realised that that was the one thing you could rely on, life rolling on and changing stuff.

I had settled into occasionally dropping the occasional sightings onto my Facebook page over that period but I've fallen out of love with Mr Zuckerberg's creation a little right now. It appears to me that they don't have the best interests of everyone at heart, some of the issues surrounding the sale of data and their ethics regarding political advertising have left a very sour taste in my mouth so I'm back here. How frequently and for how long, who knows, who cares?

There was a bit of noise on Whatsapp (another change) about Ring-necked Parakeets the other night and some interesting observations about the continued growth of the species here in Northumberland with reports of up to 20 individuals in the Newcastle area, regular flight paths over certain areas and the use of parks and gardens in the Wallsend/Walker area. This kind of coincided with me noticing that several of the people with better populated Northumberland lists on Bubo had the species included and that for comparison reasons I probably ought to stop avoiding them and take a look at least once.

So Friday in uncharacteristic sunshine I toddled along to Richardson Dees Park in Wallsend,had a walk around kicking a few Grey Squirrels off the path as I went and sure enough about half way around the perimeter bumped into four lurid green parakeets. I took some pictures, noted the incongruous nature of some of the surroundings, as I loitered with camera at the bus stop outside the Comrades Club and left with bird no #320 for Northumberland. 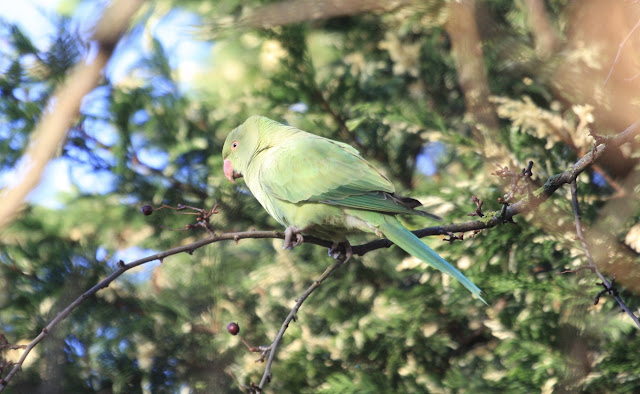 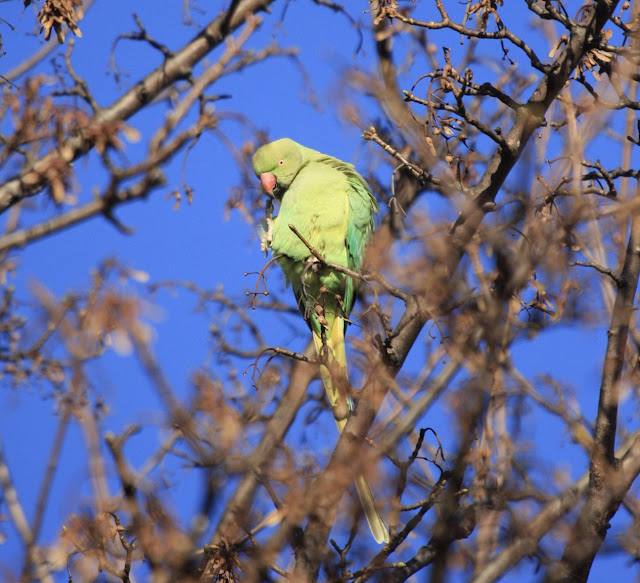 I need to do the same here in Leics. - they were ignored until last year when (after a change of county recorder) they were apparently deemed county-tickable.